Trust your NWSEO Officers, Support Staff, General Counsel and Collective Bargaining Agreement. They always have your collective best interests in mind, and work hard (sometimes hours on their own time without compensation) to ensure that.

Even if you like management NOW, there is zero guarantee that management will always be a benign partner. You ALWAYS need an organization like NWSEO, looking out for the interests of our incredible work force.

I joined initially to stop a local manager from breaking the law and violating the CBA. After seeing what NWSEO did, I remained in to support the national effort to further the NWS mission and purpose and hold national leaders accountable.

I have remained an NWSEO member for 21 years because they fight for the field and the mission. They protect mission-critical jobs and work to ensure changes are well-vetted so they don't negatively affect operations.

NWSEO gives us a voice at the Congressional level, something that we cannot have through our chain of command.

I joined NWSEO when my unit was going through a reorganization and downsizing process. At the time, there was no NWSEO presence in our work group, and no one to advocate for the rights of those affected. A team of well-meaning colleagues worked with management to make a plan, but everyone was largely ignorant of the role of NWSEO in negotiating the changes to work conditions. I certainly was. It was only after a NWSEO Regional Chair visited and explained how the bargaining unit would have been protected with representation. I had always been of the opinion that NWSEO didn't have a direct impact on me personally, but that experience was a wakeup call. 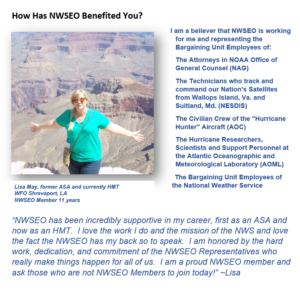 NWS/NOAA is trying to eliminate my position (ITO) based on nonfactual information. NWSEO has successfully lobbied Congress to block the NWS' plan.

I'm a proud NWSEO member because our union fights for the local office workers and their mission within the agency, without our union, we would see more uninformed an ill-advised changes being advocated from out of touch policy makers in DC than we already do.

The management of NOAA and NWS do not want me (an ITO) in a WFO and have planned for years to eliminate me. NWSEO is my only teammate that has my back!

An A76 was going to eliminate my 1340 position at the Radar Operations Center. NWSEO made sure that didn't happen.

There are managers in the NWS that think they can walk right over non-management members. They think only of themselves and do their utmost to ruin other fellow coworkers. That's the reason I joined the NWSEO.

I'm here to make sure a diversity of viewpoints are represented within NWSEO and to ensure fair treatment.

For 21 years I worked at an anti-union retailer and experienced how employees can be harassed by local management with no way to fight back. I gladly joined NWSEO as an intern. (Thanks, Jeanne Allen) Unions level the playing field. Being a NWSEO member gave me peace of mind I never had before.

Brutally honest (as usual): I joined NWSEO over two decades ago precisely because I stood against some of what national NWSEO leadership was advocating and doing. I had been a vocal critic of both union and management on assorted items, publicly, for my entire NWS career to that point. A friend who was a loyal and devoted NWSEO member made me realize that the only way to effect change and gain some protection from managerial retaliation was to join--and so I did.

While not everything I wanted has come to pass, and I still don't agree with some issues on the national level, NWSEO is much better today than 25 years ago, and has been a net positive force for protecting and enriching the working conditions of employees. I've served as a local steward for five different terms since, and gained due appreciation for the need to stand against the abuses and incompetencies that big bureaucracy can inflict upon front-line employees. NWSEO is the only organized voice for NWS meteorologists, period. You don't have to march in lockstep, but you should exercise your ability to have a say. That's the door membership opens.

During 2013, NOAA was prepared to give us all an unpaid two week furlough, even though the funds were available to keep us working. NWSEO kept that unpaid furlough from happening which was worth about 10 years of union dues.
The impact on scheduling is huge. We help determine the type of schedule we'll be working and know when we'll be working in advance. Prior to NWSEO, scheduling was often at the whim of the local manager with little notice of when one would be working from day to day.

NOAA/NWS has been trying to eliminate/consolidate ITOs for several years without taking time to learn what they actually do. NWSEO has successfully lobbied Congress to block the NWS's plan and to force the NWS to develop a pilot program to test the concept before positions are cut.

I joined NWSEO when CONOPS was threatening to do away with local offices and centralize forecasting. I was very pleased with the actions NWSEO took to protect our field offices and keep forecasting at the local level. I remain a proud member because NWSEO Is our voice, working to defend our jobs and our mission to protect lives and property.

I joined NWSEO because I believe strongly in organized labor, and come from a family whose lives would have been demonstrably more difficult without the advocacy of a union. I remain a member because NWSEO is the only voice for the NWS employees actually delivering on our mission, and is an important check on the sometimes disconnected ambitions of management.
NWSEO membership paid for itself and then some by preventing the unnecessary furloughs in recent years.

I joined the union for several reasons. The first and foremost is because of what happened back in my home state of Wisconsin when Governor Scott Walker managed to pass his infamous "Union Busting Act.” Many of my family members and friends were directly affected by that action. One of my aunts worked at a nursing home as a Certified Nursing Assistant and was a member of a union that worked to protect her work schedule and pay. Once their union was abolished the management team ran roughshod over the staff. If someone called in sick, a person that just finished a twelve hour shift would be asked to cover the vacated shift and if they refused, management had the right to fire them. The management team also slashed the staffing levels and reduced pay, which led to a major decline of employee morale. That is one example of the many horror stories of managerial abuse I have heard from my family and friends, but it is one of the main reasons I joined NWSEO.

The second reason I joined is because within the first month of my career with the NWS, the Agency unilaterally decided to open the Collective Bargaining Agreement for re-negotiation in hopes they could make it completely expire within 90 days. Shortly after that I found out about the OWA and felt that the Agency’s actions really needed to be more transparent. I joined NWSEO shortly after my one year of service anniversary and almost immediately a grievance was filed on my behalf that helped correct the Agency’s pay action that incorrectly promoted me by only a Within Grade Step Increase (GS07 to GS07 Step 2) rather than the proper two Full Grade Increases (GS07 to GS09).

Simple for me as I joined today, first request for some information I've made from NWSEO in 5 years, simply lead me to the information on the reassignment process because I accidentally deleted it, and Martin got back with me within hours. I told him it's the little things like that count, taking time from your day to help others.

I joined the union the week after the first proposal to remove the ITOs. Although it wasn't my position that was being threatened, I wanted to support the ITOs since I would want their support if my job was threatened in the future. Our agency is a great bargain for the total cost to the taxpayers, and we should fight for every job in the agency.

I am in the NWSEO for a number of reasons. The NWSEO saved thousands of jobs over 10 years ago when they thwarted an attempt by then Senator Santorum to privatize the NWS by handing over all or most of its responsibilities to Accu-weather.
Another reason is the elimination of CONOPS by NWSEO several years ago, which would have consolidated the NWS into 4 or 5 super centers, again with the loss of thousands of jobs.

The NWSEO also fought hard for the rights of dozens of worthy, and highly experienced interns several years ago, by attempting to finally secure them journeyman forecaster positions. Although the NWSEO was not successful in their attempt, they were able to secure true overtime for interns across the country (in effect producing a very healthy pay raise for all interns).
The NWSEO was instrumental in continuing to provide $300 in annual payments for employees health club memberships during the past several years.
The NWSEO has also been instrumental in thwarting local management's attempts to suspend me without pay on numerous occasions during the past several years, for reasons that were baseless and without merit. (all suspension notices were revoked). The services I received from the NWSEO during the past several years, in my opinion, were crucial in saving my job. I cannot stress enough how important it is to have an entity such as the NWSEO as a buffer between the employee and management.
All in all, I have been impressed with the services such a small, but resourceful, union has been able to provide for all employees since joining in 1995. 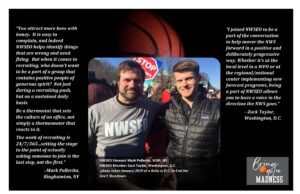 NWSEO and the LOT process helps mitigate the problems of poor managers, and helps the good ones be great! I have worked in several offices in the NWS, under a number of different managers. Thankfully, there have been more good ones than poor.

I'm here because politicians are not good at making informed decisions about the NWS. NWSEO helps us take a stand against the bad ones.

I enjoyed being active in my work with NWSEO.  I had many opportunities to strengthen the membership at that time and recruited many Student Career Experience Program (SCEP) students and interns over many years.  I also helped to organize AOML, and I participated in the NWS Diversity Council and the Health and Safety team that secured the Health & Wellness benefits for NWS employees. 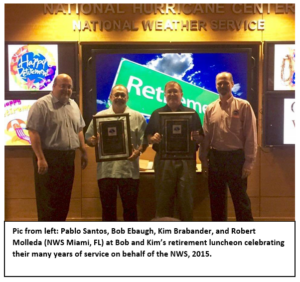 I wish the membership well and my heart is with you in the upcoming struggles for unions and especially government workers!

Stay Strong and Bless the NWSEO!  I salute you, Richard and the council and all of our active members!”

Download the 1187 form here. There is no need to include a new members' Social Security Number.

Speaking Points - Why Should I Join NWSEO?