also addressed the Convention and highlighted his commitment and gratitude to the employees as well as explaining the NOAA efforts to address sexual harassment and assault issues. Dr. Jacobs also discussed his vision for improving computing and processing across NOAA.

NWSEO Secretary/Treasurer Chris Jacobson provided the annual financial report and presented the 2021 Budget. Later in the day he led discussion on the Constitution Committee report and proposed amendments.  The NWSEO members were able to discuss and debate proposed Constitution/Bylaws amendments via a GoToMeeting session.

NWSEO Membership Director Christy Fox reported 1593 members as of September 30, 2020, highlighting efforts of top recruiters and plans to host a membership drive in November.  Congratulations to the Top Recruiter of the Year, Steward Doug Anderson, who presented “his story,” why he joined NWSEO and his recruitment tips. 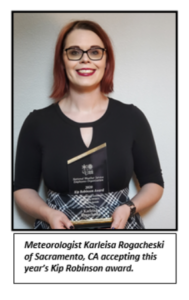 NWSEO awarded the prestigious 2020 Kip Robinson Award to Karleisa Rogacheski. This annual NWSEO award, named after a late lobbyist who worked diligently for NWSEO, is given in recognition of members volunteering their time and talents to make NWSEO a stronger union.  Karleisa has been active in the Credentials & Elections and Recruitment Committees.  She has also served on the NWS Contract Negotiation Team.  Over the past year Karleisa, has participated in time critical projects in preparation for the Federal Service Impasses Panel (FSIP) contract decision.  She has been a contributor to other NWSEO efforts such as this Convention and the new NWSEO website.

Term Limits for President and Vice President – NOT approved

(September 4, 2020) The 45th Annual NWSEO Virtual National Convention Registration is now open for all NWSEO Members. The convention is scheduled for Monday, October 12, 2020.

Please register for the NWSEO National Convention at this link:

The Convention registration period is open through October 1, 2020.

For those who have not attended the NWSEO National Convention before, this year’s virtual convention presents a unique opportunity to learn about the work and accomplishments of our organization. You will hear about upcoming events and opportunities.

Once you complete the above registration form, you will receive a convention login and password in early October that will allow you to access our convention platform. Participants will be able to view convention presentations, access session materials, post live chat comments and participate in polls on October 12, 2020.

Your fellow colleagues may join NWSEO by completing the Membership Form 1187 and sending it to membership@nwseo.org any time during the registration period to be included in this year’s virtual convention.

Thank you for your membership support. We look forward to your participation at the virtual convention!

(July 11, 2020) After much consideration about concerns for the safety of our members during the COVID-19 pandemic, we will not be holding our 2020 NWSEO Convention as planned in Las Vegas, NV.  Instead, we will evolve and hold our first ever virtual Convention, scheduled for October 12-13, 2020.  Details will be forthcoming.  For those members who have earned recruitment and travel incentives in 2020, your travel incentives will rollover to the 2021 Convention.

The Vegas experience still awaits our group as our 2021 NWSEO National Convention will be held at Caesar’s Palace on Monday, October 18 and Tuesday, October 19, 2021.  Mark your calendars and join us in Las Vegas.

The fun doesn’t stop there!  The 2022 NWSEO National Convention will be held at Harrah’s in New Orleans, LA on Monday, November 7 and Tuesday, November 8, 2022.  Take advantage of this opportunity to catch up with your NWSEO friends and family and join us.

No Changes to October NWSEO Convention - Yet Expand

(June 8, 2020) At this time, there are no changes to our NWSEO Convention scheduled to be held October 12-13, 2020 at Caesar’s Palace in Las Vegas.  However, due to the existing COVID-19 Pandemic, there have been discussions to perhaps hold this year’s convention virtually. NWSEO would like your input on this matter.  Please select the link below to complete the survey at your earliest convenience.  This survey will end June 20th.

We are continuing to monitor reopening activities in Las Vegas while also weighing the potential risks to our members and their families.  Your safety is critical to our decision, which is why we are carefully weighing various options.  If there is a decision to hold the convention virtually, there will be a Four Winds and Facebook announcement as soon as that decision is made. Again, at this time, there are no changes to the Las Vegas Convention.

We plan on a final decision on the convention venue by the mid July/early August timeframe.  Thank you for your input and continued support of NWSEO.

Below are the Delegate Reports as of October 3, 2020 for each region.

Below are the Delegate Reports as of September 26, 2020 for each region.

Below are the Delegate Reports as of September 19, 2020 for each region.

Below are the Delegate Reports as of September 12, 2020 for each region.

Below are the Delegate Reports as of September 5, 2020 for each region.

Below are the Delegate Reports as of August 29, 2020 for each region.

Below are the Delegate Reports as of August 22, 2020 for each region.

Below are the Delegate Reports as of August 15, 2020 for each region.

(May 1, 2020) NWSEO has mailed the 2020 Notice of Convention & Elections Letter to all members this week.  The letter is also posted on our website at https://nwseo.org/convention.php.  Please note a correction on page 8 of the “Tentative Convention Agenda Topics.”  It should read Monday, October 12, 2020 and Tuesday, October 13, 2020.

The letter details the procedures for participating in and nominations for local and regional elections, and includes information on the 45th National Convention scheduled for October 12-13, 2020 at Caesars Palace in Las Vegas, Nevada.  All NWSEO members are invited to attend the convention.

Any NWSEO member who recruits two or more new members to join NWSEO via payroll deduction (using Standard Form 1187) from August 1, 2019 to July 31, 2020 will be rewarded with paid airfare, 3-nights lodging, and group meals for the 2020 NWSEO National Convention.

Up-to-date news and information regarding the 2020 NWSEO National Convention will be posted on our website at https://nwseo.org/convention.php.

This letter is your notification of Steward, Vice Steward, Convention Delegate, Alternate Delegate and Regional Officer nomination and election procedures for 2020.  It also includes information about our 45th Annual NWSEO National Convention.  NWSEO will post this letter on our website: https://nwseo.org/convention.php.

All NWSEO members are invited to attend the convention and attendance is free.  Transportation, lodging, and most meals are at your own expense.  NWSEO will provide lunch on both days of the convention and a banquet dinner on Monday evening, October 12.  All members are welcome to attend our open meetings that generally begin at 8:00 am and end around 5:00 pm each day.  Tentative convention agenda topics are included at the end of this letter.

Hotel Reservations:  If you plan to attend the convention, you are responsible for making your own hotel reservations.  NWSEO has negotiated the room rate based on the Fiscal Year 2020 per diem rate (plus resort fee and taxes).  The Fiscal Year 2020 per diem rate for Las Vegas is currently $102/night.  In addition to the daily cost of each room, there is a daily Resort Fee of $45 per night, single or double occupancy.  This fee includes unlimited local phone calls, two guest admissions per day to the Fitness Center and in-room internet access for 2 devices.  Room reservations must be made by September 11, 2020.

Hotel Reservations can be made by individual attendees directly by using this link: 2020 Convention.

If you prefer to make your reservations by phone, call 1 (866) 227.5944 to secure a reservation under our group code: SCNWS0.  Please note there is an additional processing fee to make phone reservations.  There is a Recruitment Incentive available.  Please refer to page 5 for details.

Each NWSEO Branch is required to elect a delegate and an alternate delegate to the convention.  A NWSEO Branch refers to a recognized group of active members in good standing within a facility of the National Weather Service (NWS), the National Environmental Satellite, Data, and Information Service (NESDIS), NOAA Office of General Counsel, Aircraft Operations Center (AOC) and Atlantic Oceanographic and Meteorological Laboratory (AOML).

Each delegate votes on all matters that come before the convention, with one vote for each NWSEO member in the Branch(es) which that delegate represents.  If an elected delegate is not present at the convention for a vote, then the alternate delegate may cast the delegated votes.

WANT TO SUPPORT THE WORK & CAUSE OF NWSEO?